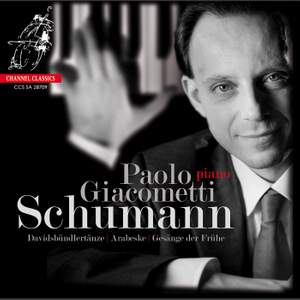 Here is a pianist who explores the inner recesses of Schumann's glowing romanticism with a delicate emotional fervour very much his own. Finely recorded, this most elegant and stylish pianist... — Gramophone Magazine, September 2009 More…

The deeply personal Davidsbündlertänze –18 dances inspired by the imaginary ‘league of David’, the Arabeske -peaceful, equable and timeless, the Gesänge der Frühe - odes to the sunrise: all works on this cd are linked with powerful personal emotions of the composer.

For Giacometti recording these works - that have been part of his musical development through the years - has been a long nourished dream.

Paolo Giacometti records exclusively for Channel Classics. His impressive discography has been widely acclaimed by the international press. His recordings include Rossini’s complete piano works, a remarkable project that started in 1998. In Rossini’s homeland critics say: "… Rossini has finally found his pianist …". For the third recording of this series Giacometti was distinguished with the Edison Classical Music Award 2001.

Paolo Giacometti’s recording of Schumann’s Humoreske, Fantasiestücke and Toccata has received the BBC Music Magazine’s Benchmark and Performance of Outstanding Quality distinctions. His recording of the Dvorák and Schumann piano concertos have been acclaimed by Gramophone as "… one of the best concerto disks I have heard in a long while …". Among his chamber music recordings, a recording with works by Schubert with cellist Pieter Wispelwey has received the Choc du Monde de la Musique and Luister 10 awards, while another recording with works by Chopin, Fauré and Poulenc, also with Pieter Wispelwey, has been awarded the Diapason d’or. Paolo Giacometti is also a dedicated piano professor at the Utrecht Conservatory of Music.

Here is a pianist who explores the inner recesses of Schumann's glowing romanticism with a delicate emotional fervour very much his own. Finely recorded, this most elegant and stylish pianist leaves you both troubled and elated as he captures to the hilt the very essence of a composer who once confessed "Sometimes I think I could sing myself to death".