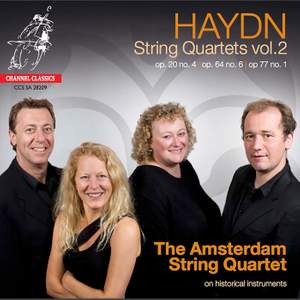 Using period instruments, the Amsterdam are particularly illuminating in the early Op. 20/4, pinpointing the bold rhythmic ambiguity of the Menuetto alla zingarese and the strongly driven energy... — BBC Music Magazine, August 2009, 4 out of 5 stars More…

The stylistic journey Haydn took from beginning to end is striking indeed, on account of the extended time period involved and the inevitable changes in musical taste across Europe. The Amsterdam String Quartet is one of today’s leading period instrument string quartets. The ensemble is specialized in the repertoire of the golden age of the string quartet: from 1762 to 1847. The Amsterdam String Quartet performs the works of Haydn, Mozart, Beethoven, Schubert, Schumann and Mendelssohn as well as the finest works of their lesser known contemporaries.

Its members are all internationally respected specialists at the forefront of the early music scene. In 2009 the quartet will embark on an extensive Haydn project which will include performing all the string quartets. Seminars, master classes at leading institutions and research in collaboration with the world's leading Haydn scholars will be presented by means of an interactive website dedicated to the string quartets of Haydn.

Using period instruments, the Amsterdam are particularly illuminating in the early Op. 20/4, pinpointing the bold rhythmic ambiguity of the Menuetto alla zingarese and the strongly driven energy in the Presto scherzando.