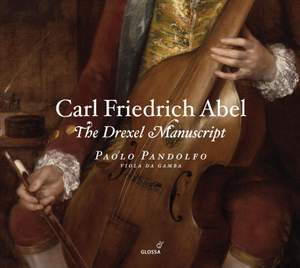 Muscular arpeggiata preludes cede to pizzicato dances of ineffable suavity, and a fugue of dazzling complexity. The sound is intoxicating, Pandolfo’s expressivity and technique beyond praise. — BBC Music Magazine More…

The fame that he enjoyed in his lifetime clearly hasn't served Carl Friedrich Abel (1723-1787) well in the two centuries since his death, at least until Hyperion’s Gramophone Award in 2008. He was fêted all over Europe both for his supreme skills as a performer of the viola da gamba as well as for the quality of his compositions, and was responsible (along with JC Bach) for setting up arguably the first series of subscription concerts in the history of Western music, the "Bach-Abel- Concerts". Even the prodigy that was Mozart benefited from Abel's teachings (and was claimed as the composer of one Abel's own symphonies). All this was known by keen minds of the time such as Charles Burney, JF Reichardt and Goethe and fortunately also, in the 21st century, by Paolo Pandolfo, who delivers here a scintillating rendition of Abel's ever-inventive music which ranges across Preludes, Adagios and sundry other dance forms.Where to place this ‘late’ music for the viola da gamba? Not Baroque and definitely heading in the direction of the classicism of Mozart, Haydn and even Beethoven. Or as Paolo Pandolfo - who adds dabs of his own highly-advanced improvisatory skills here and there - says, "Simply put, it is Music!"

Muscular arpeggiata preludes cede to pizzicato dances of ineffable suavity, and a fugue of dazzling complexity. The sound is intoxicating, Pandolfo’s expressivity and technique beyond praise.

I think his [playing] is exquisite…according to Paolo Pandolfo, Abel was an innovative and revolutionary musician and composer, writing music for his instrument at a rare level of genius. Pandolfo makes you believe
it…it’s utterly enchanting playing.

Carl Friedrich Abel was a close friend of Johann Christian Bach, with whom he later appeared in London in the celebrated Bach-Abel Concerts (1774-82). Among his other friends was the painter Thomas Gainsborough, a passionate amateur violist, whose portrait of Abel hangs in London's National Portrait Gallery. Gainsborough was the owner of the Drexel Manuscript, containing 29 pieces for solo bass viol.
We are treated on this CD to all but one – a fragment. Paolo Pandolfo has arranged them, appropriately, into two suites in D major and one in D minor, concluding with two pieces in A major. Anyone familiar with the elder Bach's solo cello suites will immediately appreciate the influences as well as the originality and relative modernity of Abel's music. Pandolfo, considered by many to be the finest violist of our day, has already recorded several of the cello suites on the viol. But whereas the Suites present the modern player with awkward challenges (the Sixth in particular), Abel's music (like that of Marais) is supremely crafted for his instrument.

In Pandolfo's hands, Abel's music is highly communicative - packed with ideas, oft-repeated and always varied. His strong sense of overall form… allows him to indulge in dynamic moments of silence, heightening the impression of monologue, and even dialogue. Technically wondrous, few could perform these delightful pieces with the skill, eloquence and sheer panache Pandolfo brings to them.