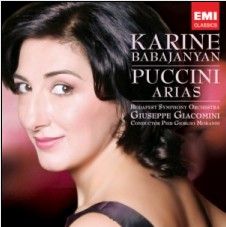 Her technique sounds rock solid and her musical instincts are unerring. The surprise of the disc is the excellent condition of the 68-year-old Giuseppe Giacomini in the Butterfly and Manon Lescaut... — Sunday Times, 5th April 2009, 3 out of 5 stars More…

Armenian soprano Karine Babajanyan has made an international impact as Cio-Cio San in numerous Madama Butterfly productions and is one of today's outstanding performers of Puccini’s divas.

“Karine Babajanyan succeeds not only acting wise but also gives us a musically complex portrayal of the title heroin...” the press wrote about her debut at the Opera House Graz as Cio-Cio-San, a role she has since performed at the New National Theatre Tokyo, the Hamburg State Opera, the Opera House Frankfurt, the State Theatres of Saarbrucken and Wiesbaden, and at the Stuttgart State Opera.

Karine Babajanyan began her musical education with piano lessons at the age of seven and continued with singing and choir direction studies at the Erivan City Conservatory, graduating with distinction. After participating in master classes in Italy the young artist returned to her native country. Here, she received her first engagement at the Armenian National Opera.

The versatile artist is hailed by both the press and the public for her “…warm-timbred, youthful dramatic voice…” in all the important roles of her repertoire e.g. the Contessa in ‘Le nozze di Figaro’, Fiordiligi in ‘Cosi fan tutte’, Mimi in ‘La Bohéme’, Leonora in ‘Il Trovatore’, just to name a few.

In 2007 the attractive soprano made her widely noticed debut as Tosca at the Bregenz Festival in Austria – seen by cinema-goers worldwide in the opera scene in the James Bond film ‘Quantum Of Solace’.

Further guest performances took Karine to the Aalto Theatre in Essen, the Mannheim National Theatre, to Bern, Basle, Oslo, Dorset and Mexico, where she keeps celebrating triumphs in roles such as Tatjana (Eugen Onegin), Norma, Leonora (La forza del destino), Maria (Mazeppa)‚ Maddalena (Andrea Chénier) and the press comments “not only is her voice true, powerful and beautiful, but she has that natural presence with which only few are blessed”.

“There was great excitement at the British debut of Armenian soprano Karine Babajanyan in the title role, and she fully satisfied the anticipation. She has attracted rave reviews in Germany, Switzerland and Israel, and local audiences were indeed fortunate to see this remarkable singer so early in her career. Not only is her voice true, powerful and beautiful, but she has that natural presence with which only few are blessed, and her performance was magnetic” Blackmore Vale Magazine on Karine Babajanyan’s UK debut in Norma with Dorset Opera

Her technique sounds rock solid and her musical instincts are unerring. The surprise of the disc is the excellent condition of the 68-year-old Giuseppe Giacomini in the Butterfly and Manon Lescaut duets. He rounds off with a ringing Nessun dorma that puts most tenors half his age to shame.

Thanks partly to her appearance in the opera scene in Quantum of Solace, the Armenian soprano Karine Babajanyan is reaching a wide audience. Her appearance as Tosca is echoed here in a stirring "Vissi D'Arte", while her experience as Cio-Cio San comes through in the Butterfly arias "Un Bel Di, Vedremo" and the duet "Bimba Dagli Occhi Pieni Di Malia"; her partner in that, Giuseppe Giacomini, gets a showcase in "Nessun Dorma".