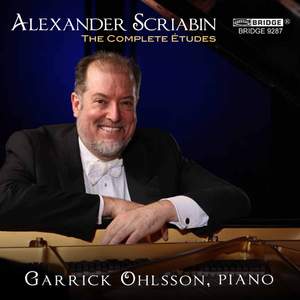 Scriabin - The Complete Etudes for Piano

Scriabin wrote his first Etude at age 15 (Op. 2, No. 1) and continued using this form up until his death. A few years after his first effort (in 1894), Scriabin composed the heroic set of Op. 8 Etudes, entering into his first maturity. Almost 10 years later, Scriabin composed his next set, the Op. 42 Etudes, works which contain something of the mystic theosophy he was so involved with at that point.

The late Etudes are all characterized by an even freer fantasy with sparer gestures and an increasingly systematic use of 'mystic' harmonies. Pianist Garrick Ohlsson is widely regarded as a leader among the American pianists of his generation.

Garrick Ohlsson's playing seems to gain in purpose and intensity as the sequence goes on and the musical language becomes ever more rare?ed and highly wrought. He catches perfectly the nervous energy of pieces such as Op 49 No 1 and Op 56 No 4 – both less than a minute long – as well as the scary obsessiveness of the Op 65 pieces, and manages it without making the music's extreme technical demands an end in themselves. He plays them all on an 1876 Steinway, too, adding edge and piquancy to the sound.