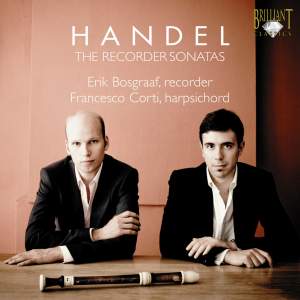 Handel: Sonata in G major for violin and continuo, HWV358

Handel’s sonatas for recorder were composed in the years 1724–6. What is remarkable is that he found the time to concentrate on such work at a time when his operas were in great demand in London: this is the period of Scipione and Agrippina. The young composer was the toast of the town, and had become a naturalised Englishman having followed his old employer the Elector of Hanover, Georg to London. Georg became King George I, and Georg Frideric Handel became George Frederick Handel. It will come as no surprise that the sonatas contain a lot of ‘operatic’ material, from Handel’s own operas, and those of his contemporaries such as Georg Muffat.

Many of the most popular arias from Handel’s operas had been published in transcriptions for recorder and keyboard – the ancestors of the operatic paraphrases by Liszt and Henselt in the 19th century. Although they can be considered as domestic music, the keyboard parts are quite virtuosic (Handel was an excellent harpsichordist), and the composer’s markings are detailed lending credence to the view that these works were also used as exercises. Handel enthusiasts will find much that is familiar in these works, sprightly fast movements and operatic larghettos, the latter no doubt influenced by the operatic workload Handel faced at the time.

‘Bosgraaf ’s virtuosity is stunning, as is his artistry’ Gramophone review for Bosgraaf ’s 3CD set of music by van Eyck

Franceso Corti studied with Bob van Asperen, and has worked with Marc Minkowski and Jordi Savall

Comprehensive booklet notes on each sonata, the instruments and the composer