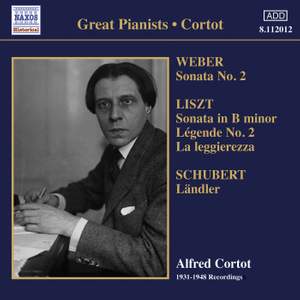 Cortot's sweeping spontaneity is irresistible. The Weber is tremendous, and Liszt's Sonata (recorded in 1929, not 1939 as per the track-listing) has a hugely impressive albeit rather breathless... — BBC Music Magazine, June 2009, 5 out of 5 stars More…

Alfred Cortot was one of the very greatest pianists of the 20th Century, renowned above all for his intuitive, highly personal interpretations of Romantic masterpieces.

Drawn from sessions in London between 1931 and 1948, these recordings include a wonderfully poetic reading of Weber’s introspective and playful Second Piano Sonata, and intense yet subtly nuanced renditions of Liszt’s groundbreaking B minor Sonata, issued almost entirely from first takes, and Légende No. 2.

A critic wrote after Cortot’s 5th January 1927 recital at New York’s Aeolian Hall: “He is one of those great musicians from whose readings of familiar works there is almost invariably something to learn and remember… it would be hard to surpass his sincerity, his feeling, his colouring, and declamation of the music. Nor are many as fortunate as he in striking the mean between what is nobly expressive and what is sentimental….”

Cortot's sweeping spontaneity is irresistible. The Weber is tremendous, and Liszt's Sonata (recorded in 1929, not 1939 as per the track-listing) has a hugely impressive albeit rather breathless drive.