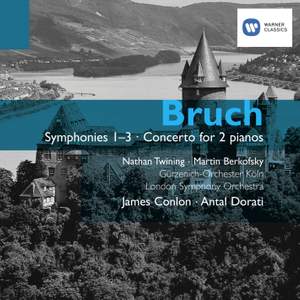 No.1 in B flat (Andante sostenuto)

No.3 Impromptu in G (Allegretto)

No.6 in E (Andante con larghezza)

Max Bruch (1838-1920) was born in Cologne and is remembered mostly for his first Violin Concerto with an extremely beautiful slow movement written in 1868 and his Scottish Fantasy, also for Violin and orchestra, dating from 1880 is increasing in popularity. His music, whilst it has echoes of Mendelssohn and Schumann, foreshadows Bruckner and the late German Romantics. It is therefore most useful to have a collection of his three symphonies to help us assess of the development of the Symphony in the later half of the nineteenth century. The first dates from the same year as the famous Violin Concerto and was dedicated to Brahms who was Bruch’s elder by five years, the second from four years later. The last had its premiere in 1882 in New York whilst the composer was nearing the end of an unhappy three years as music director of the Liverpool Philharmonic Society. The set is completed by recordings making their first appearance on CD, firstly the Concerto for two pianos which it is believed to date from 1911 (it does not appear in the list of works as part of the article in the New Grove Dictionary of Music and Musicians published in 1980) and secondly two sets of piano works dating from when Bruch was in his early twenties.