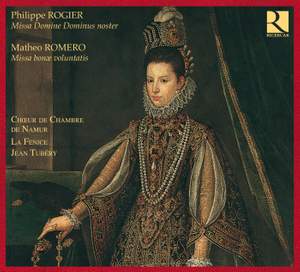 A native of Namur, Philippe Rogier was one of the musicians in charge of the marriage ceremony between the Infanta Doña Catalina and Duke Charles-Emmanuel of Savoy, celebrated in Saragossa on 11th March 1585.The ceremony is reconstructed here with a mass and motets by Philippe Rogier and a 'proprium' in Gregorian chant from the Mozarabian repertory. Matthieu Rosmarin, of Liège, spent his whole career at the Court of Spain where he was known as Matteo Romero. Master of music for Philip III and Philip IV, he was the last important composer of the period when the music of the Spanish Chapel was dominated by the 'fiamminghi'.The Missa bonae voluntatis is composed for three choirs, presented in the splendid context of an Office for the Order of the Golden Fleece, of which Romero was clerk.