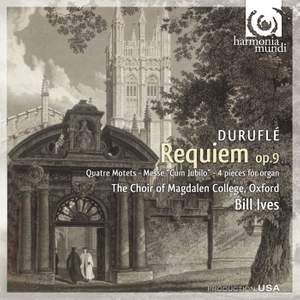 This collection, including the organ pieces played by Martin Ford, is beautifully judged - exquisite in the right sense of the word. — The Guardian

Duruflé: Fugue on a theme by Henri Rabaud

In 1961, the 59-year-old Maurice Duruflé put the finishing touches to the third and last version of his Requiem, composed 14 years previously. Duruflé had already transcribed some of these themes for the organ: hence this entire programme underlines the artistic and spiritual coherence of his approach. Bill Ives leads the men and boys of the Choir of Magdalen College, Oxford and the players of the English Sinfonia in a glorious disc, rich in timbre and deeply spiritual. Founded in 1480, the Choir of Magdalen College, Oxford was then one of the oldest and largest choral foundations in late-medieval England.That historic legacy has been preserved and maintained over five centuries.The Choir exists primarily to sing the daily church services in Magdalen College Chapel.They also sing at a number of special occasions throughout the year, including the famous May Day celebrations, an ancient tradition dating back to 1509. Magdalen College Choir records for harmonia mundi USA. Their 2004 release, With A Merrie Noyse, was nominated for a Grammy Award, with BBC Music Magazine referring to its 'perfectly paced dynamics and flawless ensemble'.This was followed by a recording of music by Christopher Tye.Their recent recording Listen Sweet Dove is of choral and organ music by Bill Ives, the Choir's current director. As a former member of The King's Singers, he has first-hand knowledge of choral singing across a wide musical spectrum.

This collection, including the organ pieces played by Martin Ford, is beautifully judged - exquisite in the right sense of the word.