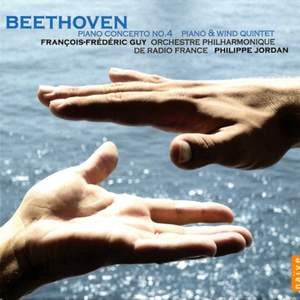 Beethoven's Op. 16 Quintet for Piano and Wind… makes an unconventional but engaging companion-piece for the Fourth Piano Concerto. François-Frédéric Guy and the members of the French Philharmonic... — BBC Music Magazine, January 2009, 5 out of 5 stars More…

Second volume in the cycle of Beethoven’s piano concertos performed by François-Frédéric Guy, the Orchestre Philharmonique de Radio France and Philippe Jordan. François-Frédéric Guy is now firmly established as a pianist of immense interpretative authority and superlative technique. With his exceptional command of keyboard sonority he has a special gift for music of the grandest scale, such as the major works of Brahms, Liszt and Beethoven. His recording of Beethoven’s “Hammerklavier” sonata for Naïve was recently picked as BBC Radio 3’s “Building a Library” choice. Philippe Jordan is one of the rising stars of the conductor’s world. He has recently been appointed as Music Director of the Opera National de Paris, starting in the 2009-10 season.

The Fourth Piano Concerto was dedicated to Beethoven’s friend, student, and patron, the Archduke Rudolph, and its first public took place on the 22nd of December 1808 in Vienna at the Theater an der Wien, where the composer himself took the stage as soloist. This was part of a marathon concert which saw Beethoven's last appearance as a soloist with orchestra, as well as the premieres of the Choral Fantasy and the Fifth and Sixth symphonies. After its first performance, the piece was neglected until 1836, when it was revived by Felix Mendelssohn. Today, it is widely performed and recorded, considered one of the central works of the piano concerto literature. The Quintet in E flat for Piano and Winds, Op. 16, was written in 1796. It was inspired by Mozart's work, K. 452, which is likewise in E flat and has the same scoring.

Beethoven's Op. 16 Quintet for Piano and Wind… makes an unconventional but engaging companion-piece for the Fourth Piano Concerto. François-Frédéric Guy and the members of the French Philharmonic Orchestra give a sensitive and meticulous account, and one that could hardly be bettered.

For Guy and his colleagues it is clearly essential that Beethoven be allowed his own voice, unclouded by mannerism or pretension, and throughout the Fourth Concerto - most profoundly lyrical of all piano concertos - he plays with an admirable unforced clarity and musical taste.

Järvi’s musicians are soloists in their own right, but often play chamber music together. It shows in their easy rapport and interplay in the long opening allegro...Gastinel and Angelich join forces for the first time on disc with the Berlin Philharmonic’s charismatic Ottensamer, a bel canto virtuoso of his instrument, for the early, urbane Clarinet Trio in B flat. Haydn could be sitting on their shoulders.