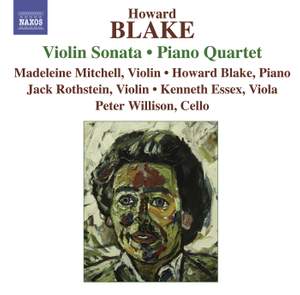 In addition to his distinguished career as a pianist and conductor, Howard Blake is a popular and prolific composer who has received an OBE for services to music.

Besides film scores (which include the extraordinarily successful and popular The Snowman), choral, orchestral and instrumental works, ballets and opera, his output includes much chamber music.

This disc presents world première recordings of four important works; the virtuosic Violin Sonata, the hauntingly beautiful Penillion, the sunshine-filled Piano Quartet with its touching slow movement, and the Jazz Dances, which, in the composer’s words, ‘pay mischievous but affectionate homage to the rhythmic intricacies of popular dance forms’.

“Howard Blake is a versatile composer who may be better known for his marvellous film scores The Snowman and Granpa in which his gifts for colourful orchestration and memorable tunes are clearly evident. He nevertheless also composed a good deal of concert works including the superb choral-orchestral Benedictus and several concertos.” Helios

This world-premiere recording of four chamber masterworks, overflowing with beguiling melodies and catchy rhythms, should win Blake many new admirers