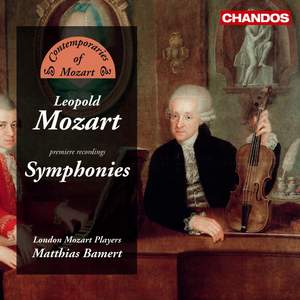 The best-selling Contemporaries of Mozart series is one of Chandos’ longest-running recording projects and we are delighted to add a selection of symphonies by the Salzburg composer Leopold Mozart to the collection. Conducted by Matthias Bamert and the London Mozart Players, the broad range of Leopold’s symphonic style is on clear display in the charming symphonies recorded here. All the works are recorded for the first time.

Although Leopold Mozart‘s reputation as a violinist, teacher and composer was eclipsed early on by his renown as the father of Wolfgang Amadeus, prior to Wolfgang’s birth Leopold held a respected position at the Salzburg court and had achieved European fame not only for his highly-regarded teaching, but also his compositions.

Among the chief works by which Leopold established his compositional popularity, his symphonies take pride of place: they far outstrip in quality, to say nothing of quantity, the symphonies of his Salzburg contemporaries or, for that matter, most other early composers in Europe. His oeuvre was extensive and it is clear from his letters that Leopold considered himself a modern, fashionable composer, a claim borne out not only by the works themselves but by later musicologists. His style was that of a generation younger and shows a clear progress toward sonata form.

Under the guidance of Matthias Bamert this beautiful music is sure to flourish amongst the Contemporaries of Mozart series and will no doubt guarantee Leopold Mozart the recognition he deserves, as a composer in his own right.

Matthius Bamert and the London Mozart Players's programme of Leopold Mozart symphonies reveals a deft musical craftsman whose works are graced by genial melodies, animated by an exuberant espirit de coeur and imbued with the intimacy of chamber music. The orchestra gives polished, suavely proficient performances, and the virtuoso horn playing deserves mention, notably in two C major symphonies - C1, with its dramatic opening movement, and D1, with its rousing finale.

…Bamert and the LMP (stunning horns) generate more excitement, though textures can blur in the bright, resonant church acoustic.