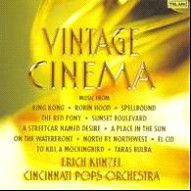 1. Main title and Entrance of King Kong from King Kong

2. Robin Hood and his Merry Men from The Adventures of Robin Hood

4. Selections from The Red Pony

6. Suite from A Streetcar Named Desire

7. Suite from A Place in the Sun

8. Selections from on the Waterfront

9. Overture from North by Northwest

11. Main Title from To Kill a Mockingbird

12. The Ride of the Cossacks from Taras Bulba

This disc showcases developing musical styles used in films spanning nearly 30 years, beginning with Max Steiner’s theme to the original King Kong (1933) and moving on to merry old England for Eric Wolfgang Korngold’s theme to the spectacular 1938 film, The Adventures of Robin Hood. Alfred Hitchcock understood the vital role music plays in film. Miklós Rózsa’s suite from the 1945 thriller Spellbound captures the psychological suspense with the unique timbre of a theremin - Rózsa won his first Oscar for this score. Legendary film composer Bernard Herrmann’s overture to Hitchcock’s “wrong man” thriller, North by Northwest (1959) is next in the tracklist.

Aaron Copland lent his considerable talents to Hollywood on several occasions, including the 1947 screen adaptation of John Steinbeck’s The Red Pony, selections from the folk-like score are included here. Two Oscar-winning scores by Franz Waxman, one from Billy Wilder’s 1950 classic Sunset Boulevard, as well as A Place in the Sun the following year, deliver quintessential 50’s film music. Next is Alex North’s New Orleans-spiced 1951 score for A Streetcar Named Desire, the first important Hollywood score to incorporate jazz. The great Leonard Bernstein scored only one film, but On the Waterfront (1954) is widely regarded as cinematic classic.

Vintage Cinema then turns to the 1960s in its three final tracks: Rózsa’s Spanish-flavoured overture to the lavish Charlton Heston epic, El Cid (1961), Elmer Bernstein’s main title theme from To Kill a Mockingbird (1962), and the rousing “Ride of the Cossacks” from Taras Bulba, a 1962 film scored again by the inimitable Franz Waxman.