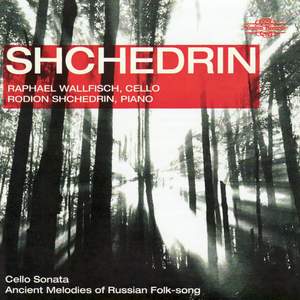 Supported by a warmly ambient recording, the playing here is… sharply characterised and powerfully projected… — BBC Music Magazine, January 2009, 4 out of 5 stars More…

I. Lento in poco rubato

Rodion Schedrin: In the Style of Albéniz

Shchedrin wrote his Sonata for cello and piano in 1996 for his great friend Mstislav Rostropovich, who had already been the dedicatee of his Cello Concerto ‘Sotto Voce’ of 1994 and would later have the Parabola Concertante for cello, strings and timpani (2001 – recorded on Nimbus NI5816) written for him. There are three movements which in their character and disposition are reminiscent of the late string works of Shostakovich.

In the Style of Albeniz is a short early piece written in 1952 when he was twenty. One of Shchedrin’s bestknown short pieces, it was originally composed for piano solo and incorporated in his set of 10 Piano Pieces which are widely used as teaching material.

The Quadrille, one of its best-known numbers, was arranged for cello and piano by Grigory Singer. Opening with an ardent, romantic cello solo, the piece opens up into a virtuosically- presented parade of folklike tunes over repeated ostinato rhythms which both seem to satirize Russian sentimentality and display how much Shchedrin owed to the music of Stravinsky in his early period.

Supported by a warmly ambient recording, the playing here is… sharply characterised and powerfully projected…

Wallfisch is… an ardent exponent of an idiom not unlike that of late Shostakovich but also reflecting Shchedrin's immersion in the world of Bach, his fascination with bell-like sonorities and his abiding fondness for the grotesque.