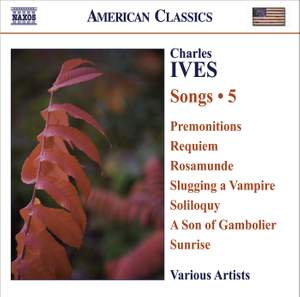 Ives, C: The Sea of Sleep

Ives, C: The Side Show

Ives, C: Soliloquy, or a Study in 7ths and Other Things

Ives, C: A Son of a Gambolier

Ives, C: A Song - For Anything: Hear My Prayer, O Lord

Ives, C: A Song - For Anything

A Song - For Anything: When the waves softly sigh

A Song - For Anything: Yale, Farewell!

Ives, C: The Song of the Dead

Charles Ives wrote almost two hundred songs. Although his reputation rests on orchestral, chamber and piano music, it is Ives's songs that represent the heart of his creative thinking.

The expressive variety encountered is accordingly vast: indeed, the gradual evolution of Ives’s songwriting is analogous to the wider evolution of American music during the late nineteenth and early twentieth centuries.

This new edition includes all the songs that Ives completed. The alphabetic approach ensures that each volume (of which this disc is the fourth of six) contains a representative cross-section

“These songs, with all their quirks and flights of fantasy, [are] among the most important of the 20th century in any language.” The Guardian