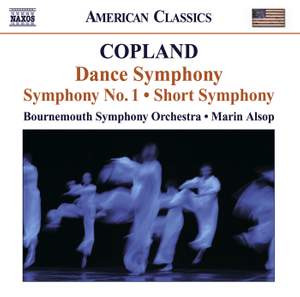 Under Marin Alsop's incisive direction, the Bournemouth musicians perform all three works with just the right blend of power and finesse, and negotiate their sometimes extremely complex rhythms... — BBC Music Magazine, December 2008, 5 out of 5 stars More…

I. Dance of the Adolescent: Lento - Molto allegro

II. Dance of the Girl Who Moves as if in a Dream: Andante moderato

James selects some of his favourite recordings of the music of the quintessentially American composer, Aaron Copland.

This second Naxos disc of Copland Symphonies (No. 3 is available on 8.559106) opens with Symphony No. 1, an arrangement of the 1924 Symphony for Organ and Orchestra. Copland was especially fond of his Short Symphony (Symphony No. 2) on account of its complex, irregular rhythms and clear textures.

The so-called Dance Symphony, described by the composer as ‘a large symphonic work’ (hence the Symphony title), is derived from his early vampire ballet Grohg, inspired by the 1921 German expressionist film Nosferatu. Copland wrote: ‘If the first movement is thin, dainty and pointed, the second movement is songful and sustained. The third movement is characterized by violence and syncopation.’

“[Marin Alsop's] typecasting as an interpreter of the American symphonists is warranted.” Philadelphia Inquirer

Under Marin Alsop's incisive direction, the Bournemouth musicians perform all three works with just the right blend of power and finesse, and negotiate their sometimes extremely complex rhythms with confidence and precision.

There are two attractions here: the only current recording of the Short Symphony and a fine recording of Symphony No 1 – at last. It started life as the Symphony for Organ and Orchestra, written for Copland's teacher Nadia Boulanger whose performances launched his career in 1925. Six years later the reworking of the score without organ was first performed but it has never made much headway. Alsop and the Bournemouth players make a fine case for this neglected score with many characteristics of mature Copland.
There are also two versions of Copland's ShortSymphony. It was first played in Mexico City under Carlos Chávez in 1934 but the rhythmic difficulties were considered so great that the American premiere had to wait 10 years. Meanwhile, despairing of orchestral performances, Copland made the version for sextet. There are no difficulties now for the Bournemouth SO but one might have hoped for more sparkle and a better recording.
There are odd circumstances about the DanceSymphony too. It was taken from the ballet Grohg – never performed – that Copland wrote during his student years in Paris. In the absence of a full recording of Grohg, the Dance Symphony completes an essential CD.

There are two attractions here: the only current recording of the Short Symphony and a fine recording of Symphony No 1 - at last.

A fine disc of Copland's lesser-known symphonies from Marin Alsop and the Bournemouth Symphony Orchestra, including an infectiously spirited account of the Dance Symphony and a searching performance of Symphony No. 1.

It's that relatively unfamiliar work [Symphony No. 1] for which Alsop makes the most persuasive case here...The interest in the 1933 Short Symphony (also known as Symphony No 2) is predominantly rhythmic, with intricacies that inhibited early performances but that Alsop and the BSO take in their stride.