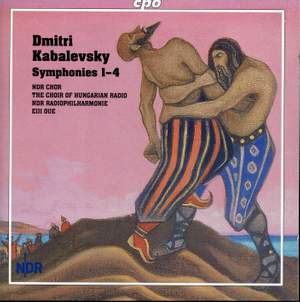 Symphony No. 1 in C-Sharp Minor, Op. 18: I. Andante molto sostenuto

Kabalevsky: Symphony No. 3, Op. 22 for orchestra and mixed chorus “Requiem for Lenin”

Dmitri Kabalevsky was one of the most important, frequently performed composers of Soviet Russia. He did his utmost to conform to government cultural policy, occupying important positions in the Union of Soviet Composers.

Kabalevsky was not as adventurous as his contemporaries in terms of harmony and preferred a more conventional diatonicism, interlaced with chromaticism and major-minor interplay. Unlike fellow composer Sergei Prokofiev, he embraced the ideas of socialist realism but his works were favoured by the government for being more ‘accessible’ than the works of Prokofiev and Shostakovich. His post-war works have been characterized as "popular, and successful."

This new disc is a complete recording of the four synphonies, including the world première of the third symphony ‘Requiem for Lenin’. Christoph Schlüren, booklet author for this disc writes that the works reveals not a propaganda composer, which was the common preconception of composers of Soviet Russia, but a highly expressive romantic musician full of energy.