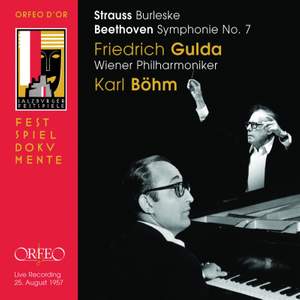 Among the countless concerts that Karl Böhm conducted with the Vienna Philharmonic Orchestra at the Salzburg Festival were not only a number of inevitable repeats of standard works from the mainstream symphonic repertory but also a number of surprises and genuine trouvailles. One such concert occurred in 1957, when Böhm joined forces with a young firebrand to perform a rarely heard early work by Richard Strauss, who at the time of its composition was widely regarded as a member of the avant-garde. Returning to Salzburg for the first time since his Festival début six years earlier, Friedrich Gulda performed the Burleske in D minor, once described by Hans von Bülow as "inhumanly difficult".When von Bülow declined to give its first performance, that honour fell to Eugen d'Albert. For Gulda, there was no knuckle-breaking cascade of notes, no insane accelerando or dynamic outburst that was so "inhuman" that it could not be placed in a meaningful and thrilling musical context with the help of Böhm and the Vienna Philharmonic.The result is a rewarding re-encounter firmly with the 'Romantic' tradition.