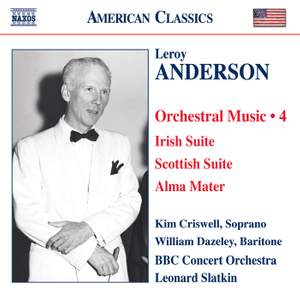 On Volume 4 of this Naxos series, only the delightful Summer Skies falls into the familiar format of Anderson orchestral miniature. The rest constitutes arrangements, including Anderson's exquisitely... — Gramophone Classical Music Guide, 2010 More…

I. The Irish Washerwoman

III. The Rakes of Mallow

IV. The Wearing of the Green

V. The Last Rose of Summer

VI. The Girl I Left Behind Me

To a Wild Rose (arr. L. Anderson for orchestra)

II. Turn Ye To Me

III. The Bluebells of Scotland

IV. The Campbells are Coming

Anderson, Leroy: Belle of the Ball (version with voice)

Leroy Anderson etched out his own unique place in American music – a composer rigorously trained in the classical tradition whose records topped the pop charts, a meticulous arranger of music whose own melodies were crafted with inventive precision.

Here, in the first complete cycle of Anderson’s orchestral music, the Anderson family has made available several pieces that the composer did not release, with some first recordings scattered among the familiar and not-sofamiliar titles. Volume Four concentrates on Anderson’s many arrangements, as well as revisions or alternate versions of his own works, including Alma Mater, a reworking of his 1939 suite Harvard Sketches.

On Volume 4 of this Naxos series, only the delightful Summer Skies falls into the familiar format of Anderson orchestral miniature. The rest constitutes arrangements, including Anderson's exquisitely wrought orchestration of MacDowell's To a Wild Rose. If the inclusion of vocal arrangements of Blue Tango, ForgottenDreams and Belle of the Ball in a collection of orchestral works seems strange, few will object to the chance to hear Tin Pan Alley's attempts to capitalise on Anderson's successes.
The Irish Suite (the main item on this disc) – a clever compilation of Irish folk tunes – has already been recorded by Fiedler, Anderson himself (four movements only) and Fennell, and is done here with no less grace, charm and excitement. On the back of its success, Anderson conceived his Scottish Suite, but he completed only four of the planned six movements, recorded only two, and then withdrew the suite altogether. Though overall nowhere near as clever a piece as its predecessor, it's good to have the whole included here; 'Turn ye to me' is especially beautifully done.
Previous volumes in this series have included suites of carols; however, the arrangement of less devotional melodies within the Christmas overture heard here seems to me much the most attractive of such seasonal offerings.
Another of Anderson's Christmas selections (this time for woodwind) appears on Volume 5, a CD that's otherwise given over wholly to music from the only Anderson theatre score ever to reach Broadway. We have here a good proportion of Goldilocks (a misleading title, for the show is about a quarrelling actress and a millionaire who eventually acknowledge their love), though it's by no means as comprehensive as the original Broadway cast version. It's not made clear why – in a less than overfilled CD – the selection is so restricted. In fact, it's less a representation of the show per se than a concert suite – an ad hoc compilation of show extracts and Anderson's own concert arrangements.
Thus it offers something different for those who know the show as much as for those who don't.
Kim Criswell and William Dazeley do the vocal items justice, and as ever Leonard Slatkin and the BBC Concert Orchestra provide performances full of panache which are absolutely in the authentic Anderson orchestral style.
Those who have followed the series so far will find these successors no less superbly performed, recorded and annotated.

The Irish Suite (the main item on this disc) - a clever compilation of Irish folk tunes… is done here with… grace, charm and excitement.