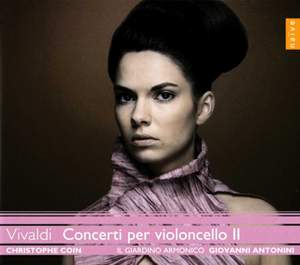 Altogether the great Venetian composer Antonio Vivaldi left 27 concertos for cello, string orchestra and basso continuo. This is the second volume of these works to be released in the critically acclaimed “Vivaldi Edition” from Naïve. The CD features the same expert performers as Volume l, the distinguished French cellist Christophe Coin and Il Giardino Armonico under the conductor Giovanni Antonini.

Out of the seven concertos included on the disc, it is worth mentioning a few in particular. The concerto RV 411, in F major, is a sunny, fluent work from the 1720s, which, like so many of Vivaldi’s instrumental works from this period, bears strong traces of the lyrical style cultivated in his operas and cantatas. Expertly structured though this concerto is, its thematic content can be read as a potpourri of favourite musical motifs taken from the operatic stockpot. Most impressive of the works on this disc is the mature concerto in E flat RV 408. The key of E flat, greatly liked by Vivaldi, lends itself to the expression of solemn grandeur, a property abetted by the fact that the open string G is the third of the tonic triad. Like RV 411, this concerto has succumbed to the benign influence of the vocal style. It exemplifies to a high degree Vivaldi’s habit of combining the ultra-simple with the highly sophisticated. RV 417 is in G minor and conforms to tradition for this key by being fiery, almost truculent, in expression.

A founder member of the multi-award winning Quatuor Mosaïques, Christophe Coin is recognised worldwide as one of the leading experts in the authentic performance of the cello repertoire. Since 1991, as director of the Ensemble Baroque de Limoges, he has with great success explored the European repertoires of the seventeenth and eighteenth centuries. His career and his recordings of Vivaldi concertos were the subject of a major interview feature in The Strad this summer.

Il Giardino Armonico, founded in Milan in 1985 and directed by Giovanni Antonini, is one of today’s most admired and sought-after ensembles specialising in performance on period instruments, especially music of the seventeenth and eighteenth centuries. Depending on the demands of each programme, the group will consist of anything from three to thirty musicians.

…you would need to have ears of putty not to respond to Coin's smooth, silvery tone - perhaps the loveliest you'll hear from a Baroque cello - but his poetic musical sensitivity also enables him to rise to memorable expressive heights…