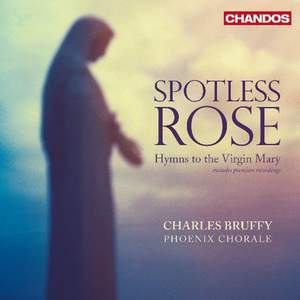 Jean Belmont Ford's cycle Electa is a real discovery, performed with a naturalness and ease that carries one unerringly through very unfamiliar musical territory. — BBC Music Magazine, October 2008, 4 out of 5 stars More…

I. Fair in face

II. I Beheld Her, Beautiful as a Dove

III. Rise Up, My Love, My Fair One

Stephen Paulus is one of America’s most prominent composers, recognised particularly for his empathetic vocal writing. In Splendid Jewel, based on a fourteenth-century lauda, Paulus imparts a mediaeval flavour to the setting of this ancient text, which he then warms with his own harmonic language. A Hymn to the Virgin is one of Britten’s earliest pieces, written in 1930 when Britten was not quite seventeen. Britten retained a warm feeling for this youthful piece, so much so that it was one of the pieces performed at his funeral.

The English composer Cecilia McDowall is well known for her sensitive text setting. The ‘Ave Regina’ and the ‘Regina caeli’ are two of the four great Marian antiphons of the ancient Church and McDowall’s settings of them are here followed by a haunting Ave, Maria for women’s voices. She is joined by another English composer, Herbert Howells, a composer famous for his choral music, and more especially for his sacred music. His setting of the fourteenth-century Marian text ‘A Spotless Rose’ dates from his mid-twenties, and is dedicated to his mother. The Liturgical Motets are among Healey Willan’s best-known pieces, and the three recorded here take their texts from Responsories from an eighth-century Office of Our Lady and from the Song of Solomon. Completing the SACD are works by Javier Busto and Jean Belmont Ford. Belmont Ford has long been a favourite of Charles Bruffy and his choirs, who are enthusiastic champions of her work. Electa, a commission by the Kansas City Chorale in 1995 and recorded here for the first time, draws on various liturgical texts to weave a tapestry of praise to the Virgin Mary. In his Ave, Maria and Ave maris stella, the latter a premiere recording, Busto sets the familiar ancient texts. The SA-CD booklet comes with notes and full texts in three languages.

Jean Belmont Ford's cycle Electa is a real discovery, performed with a naturalness and ease that carries one unerringly through very unfamiliar musical territory.

Choral singing just doesn't get much better than this. When it comes to purity of tone, daunting precision and superfine blend, Charles Bruffy's remarkable Phoenix Chorale have it all - and then some!