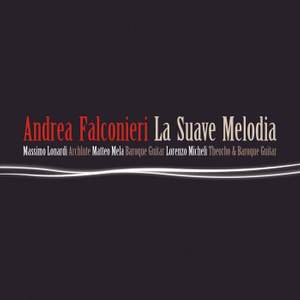 Corbetta: Sinfonia a due

Discover the music of a little known figure of the 17th century: Andrea Falconieri. Composer, lutenist, theorbist and guitarist, he was born in 1585. Sources call him 'Neapolitan': important since Naples at the end of the XVIth Century was a centre rich in cultural ferment and alive with musical activity. In Naples in 1536 a book for the lute was published by Francesco da Milano and it was Pierino Fiorentino, da Milano's pupil, who created the great Neapolitan school of the lute. In 1650 Falconieri's Primo Libro was published in Naples.The collection finds its place in the line of the 16th-century tradition of music without precise instrumentation, still in favour at that time, so for this recording the artists have chosen, following historically documented practice, three instruments which Falconieri the composer might have played.