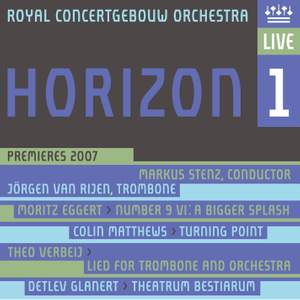 All four pieces… share an exuberant love of the possibilities of large forces and the Amsterdamers respond with a deal of warm-spirited élan - letting their hair down with very un-North European... — BBC Music Magazine, February 2009, 5 out of 5 stars More…

Verbey: Lied for trombone and orchestra

The Royal Concertgebouw Orchestra is famous throughout the world for its interpretations of works in the Classical symphonic repertoire. But, as with its legendary performances of the works of Mahler and Strauss at the beginning of the 20th-century, the orchestra is also open to new developments in contemporary music. Exploring new horizons and sound spaces, the orchestra continues to foster relationships with contemporary composers employing unconventional working methods. Compositions by Theo Verbey, Moritz Eggert, Colin Matthews and Detlev Glanert, the first three having been written specially for the RCO, attest to the orchestra's unrivalled sound inspire tour-de-force performances by the musicians.

A supporter and enthusiastic advocate of such orchestral exploits, conductor Markus Stenz leaves his own unmistakable stamp on these live recordings. Jörgen van Rijen was featured in One to Watch in Gramophone, May issue.A Borletti-Buitoni Trust Award winner, the Verbeij concerto was commisioned by the RCO for him, the youngest member when he joined as principal trombone in 1997.

All four pieces… share an exuberant love of the possibilities of large forces and the Amsterdamers respond with a deal of warm-spirited élan - letting their hair down with very un-North European abandon in Eggert's Hockney-derived romp which somehow manages to hold together a collage of very different styles: lush to louche, incisive to relaxed. Throughout, Stenz conducts with tremendous authority, acuity and verve.

Markus Stenz is a natural interpreter of these pieces, and I hope that Horizon 1 will have numerous successors.

one of the most spirited collages of every style under the sun to have come my way.

Colin Matthews's Turning Point that will attract the most attention, though, for it's a major achievement, a 20-minute single movement that seems to change direction completely around its half-way mark, transforming from a lightning fast scherzo to a glacially slow unfolding that reaches a catastrophic climax.

Andrew Clements 3 out of 5 stars