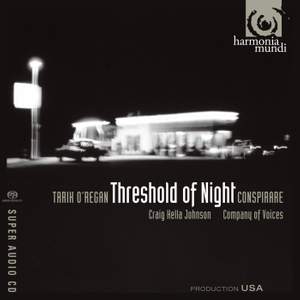 It's difficult to describe O'Regan's music without recourse to smiles based on light. His writing for the upper voices, especially, shimmers and shines, often suggesting outpourings of celestial... — BBC Music Magazine, December 2008, More…

O'Regan: Had I Not Seen the Sun

O'Regan: The Ecstasies Above

II. As We Remember Them

III. From Heaven Distilled a Clemency

O'Regan: I Had No Time To Hate

A selection of new works by the young British composer Tarik O'Regan, here given their première recordings.Written since his move to New York, these compositions forge a link between the spheres of 'the ecstasies above' and the harsh realities of life on earth. The two short Emily Dickinson settings that open and close this programme were commissioned by Conspirare and Craig Hella Johnson for this recording. The Ecstasies Above (2006) takes for its title a phrase found in the lyric poem, Israfel, by Edgar Allan Poe. Musically the score makes much use of textural variation between the three groups (full chorus, solo octet and string quartet). Threshold of Night (Kathleen Raine) was commissioned by St. John's College, Cambridge and was premièred under the direction of David Hill in the College chapel on November 25, 2006.The piece went on to win a 2007 British Composer Award. Tal vez tenemos tiempo (Maybe we have time) was also commissioned specifically for this recording by Conspirare. It sets a poem of the same name by Chilean poet Pablo Neruda. Written in 1999, Care Charminge Sleepe is scored for double choir, and is a faithful reproduction of John Fletcher's original 17th-century text, with anachronistic spelling, as set in the musical score of Valentinian III by Robert Johnson.Triptych represents the concatenation of two commissions. Threnody was commissioned with funds from the RVW Trust for the inaugural concert of the Choir of London conducted by Jeremy Summerly in Christ Church, Spitalfields on December 18, 2004; As We Remember Them and From Heaven Distilled a Clemency, were premièred as And There Was a Great Calm at Portsmouth Anglican Cathedral on November 13, 2005. Two-time British Composer Award winner Tarik O'Regan has been hailed as "a brilliant new voice" Houston Chronicle whose music 'has a gritty freshness unlike that of anyone else',The Independent. He divides his time between New York City and Trinity College, Cambridge, and is currently working on an operatic version of Joseph Conrad's Heart of Darkness, in collaboration with the artist Tom Phillips, which is in development with OperaGenesis at the Royal Opera House. Conspirare celebrated its 15th performance season in 2007-08 under the leadership of founder and Artistic Director Craig Hella Johnson. Conspirare is comprised of three performing ensembles: a professional chamber choir, a symphonic choir of both professional and volunteer singers and the Conspirare Children's Choir, a training programme for ages 9-16. Conspirare was the only choir from the United States invited to perform at the 8th World Symposium on Choral Music in Copenhagen in July 2008.

It's difficult to describe O'Regan's music without recourse to smiles based on light. His writing for the upper voices, especially, shimmers and shines, often suggesting outpourings of celestial radiance.

O'Regan's complex yet elemental-sounding music reaches for the divine with a maturity far beyond what one expects of a composer barely thirty years of age, and his settings work on several levels, translating more than just general mood.

The polished performance by US choir Conspirare with string ensemble breathes energy into a series of diverse texts crafted into pieces that are a masterclass in how to refine ideas, by a composer with a profound
understanding of how to write for choirs.

Tarik O'Regan can justifiably stake a claim as one of the leading British choral composers of his generation. This is supported to an extent by the seven choral compositions contained on this recording.
At the basis of O'Regan's style lies a thoroughgoing understanding of both the English choral tradition and medieval music, a knowledge gained from studies at Oxford and Cambridge.
But recent works suggest that he casts his creative net much wider these days. Post-minimal and pop features can be detected in the use of straightforward harmonic progressions and melodic repetitions in the final sections of both The Ecstasies Above and Triptych, where O'Regan dispenses with contrapuntal complexity for a direct and unadorned approach. If this suggests an American influence then it is also evident in his choice of text settings, with Edgar Allan Poe and Emily Dickinson's poetry framing the collection.
However, it is sometimes difficult not to draw comparisons between the often static, sometimes propulsive, polymodal layers incorporated throughout O'Regan's music (especially effective in Care Charming Sleepe) and similar processes at work in the choral writing of John Adams. In contrast, Adams has effected a fine timbral and textural balance between voices and instruments in his music – homogeneity rather than hierarchy – but one senses that the string instruments contained on this recording struggle to find their place in and among the dense choral web.