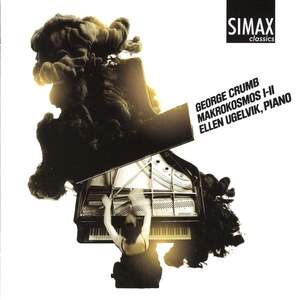 One of the most well known composers of his generation, George Crumb has developed his very own piano style over the years – a sonic universe of limitless variety. One does not ‘just play’ Crumb, the performer is also required to whistle, sing, shout and whisper in numerous clearly defined ways. Ellen Ugelvik has studied the Makrokosmos in detail with Crumb himself, enabling her to investigate further the ideas and ideals behind various parameters in the score. The liner notes for the release are written by David Burge, who gave the world premiere of the Makrokosmos I.

“While composing Makrokosmos, I was aware of certain recurrent haunting images. At times quite vivid, at times vague and almost subliminal, these images seemed to coalesce around the following several ideas (given in no logical sequence, since there is none): the ‘magical properties’ of music; the problem of the origin of evil’ the ‘timelessness’ of time; a sense of the profound ironies of life so beautifully expressed in the music of Mozart and Mahler.” – George Crumb

Ellen Ugelvik makes her debut recording with the world’s first 5.1 surround sound recording of George Crumb’s Makrokosmos I & II. She was born in Bergen, and has studied with Einar Røttingen at the Grieg Academy in Bergen, Håkon Austbø at the Conservatorium van Amsterdam and Steffen Schleiermacher at the Hochschule für Musik und Theater, Leipzig. She collaborates regularly with composers like George Crumb, Louis Andriessen, Rolf Wallin, Magne Hegdal, Knut Vaage, and Dai Fujikura, some of which have dedicated works to her.