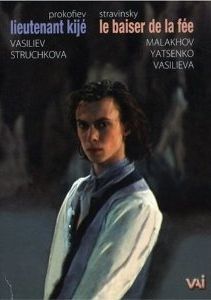 Igor Stravinsky composed the score to Le Baiser de la Fée, based on Hans Christian Andersen’s tale, “The Ice Maiden.” as an homage to Tchaikovsky. It was first produced in 1937, with choreography by George Balanchine. This 1990 film version was choreographed by Natalia Kasatkina and Vladimir Vasiliev, and stars the world-renowned dancer Vladimir Malakhov. Sergei Prokofiev composed the score of Lieutenant Kijé in 1933 for a film verion of Yuri Tinyanov’s 1927 novella. The ballet adaption seen here was choreographed by Alexander Lapauri and Olga Tarasova and first produced at the Bolshoi in 1963. The stellar cast for this 1969 production includes Raisa Struchkova and Vladimir Vasiliev. Bonus segments feature Raisa Struchkova and Boris Khokhlov in Pas de deux from Sleeping Beauty and Don Quixote.