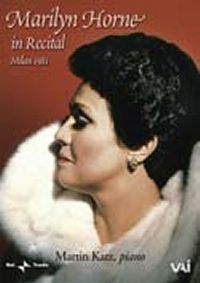 Copland: At the River

Foster, S: I Dream of Jeanie with the Light Brown Hair

Though Marilyn Horne is known mostly for her virtuosic operatic roles, she is a superb recitalist who can scale her powerful voice down to the more intimate requirements of the recital stage. In 1981, she appeared at Milan’s La Scala opera house in a recital consisting of music by Italian, German, Spanish, French and American composers. Horne was in particularly superb form that evening, partnered brilliantly by Martin Katz at the piano. 93 minutes, color, mono.