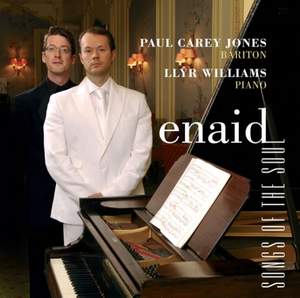 Enaid: Songs of the Soul

Although they both studied at The Queen’s College, Oxford, Paul Carey Jones and Llyr Williams first met at the Royal Academy of Music, where they began their studies at the same time. They formed a partnership there which is now entering its tenth year. As long ago as 2001 their collaboration was receiving critical attention, the South Wales Argus commenting on their recital at the Lower Machen Festival that year, “A candlelit song recital on Saturday might just prove to have been the festival’s most magical event … Jones’ baritone is almost in the Fischer-Dieskau mould: light and airy but with striking depth for the graver songs. Pianist Williams is simply a talent of enormous potential, much of it already realised. Singer-keyboard duos don’t always click. This one seems capable of renewal and consolidation.” As a duo they were members of the late Yehudi Menuhin’s Live Music Now scheme for several years, touring most parts of the United Kingdom and giving nearly a hundred performances together, and they continue to work regularly together as recitalists.