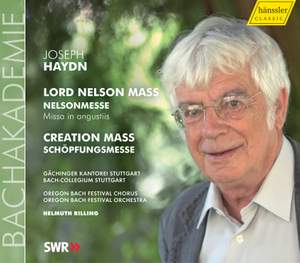 The so-called "Lord Nelson" Mass dates from 1798 when the composer was 66 and in the middle of an autumnal creative outburst that included "The Seasons", "The Creation" and the three great late Masses. Two stories explaining the origins of the popular nick-name for the dramatic Missa in angustiis (Mass in time of anguish) exist - one that the work was written at the time of the sea battle at Aboukir Bay, another that the great Admiral himself attended a performance in 1800. Haydn's Mass in B-flat Major, which he wrote in 1801 to celebrate the name day of Princess Maria Hermenegild Esterhazy whose husband, Prince Nikolaus Esterhazy, employed Haydn as his Kapellmeister. Written for orchestra, choir and soloists, this mass was nicknamed the "Creation Mass" because it quotes a few measures from Haydn's "The Creation" oratorio.