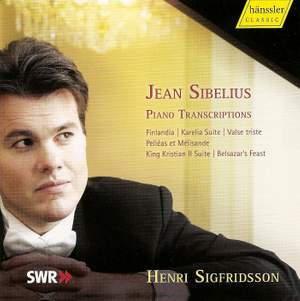 No. 6. Prelude to Act III Scene 1, "Melisande at the Spinning Wheel"

The Finnish composer Jean Sibelius is famous mostly for his orchestral music. His seven symphonies and his violin concerto are known throughout the world. Much less familiar to the listeners is his piano music, although he composed well over one hundred pieces for the piano. Even less well-known are the more than 20 original piano arrangements of Sibelius's orchestral works. It was not until the 1980s that pianists noticed that many of these arrangements are actually more suitable for large concert halls than the original piano works, which are often modest in scope and technical demands. For his first recording for Hänssler Classic, the young Finnish virtuoso Henri Sigfridsson has selected a program of some of Sibelius' own arrangements of his most popular works - including Finlandia, Valse triste and the Karelia Suite.