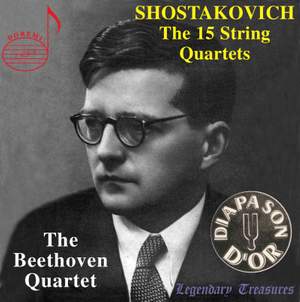 The Beethoven Quartet, with the Komitas Quartet

String Quartet No. 2 in A Major, Op. 68: II. Recitative and Romance. Adagio

String Quartet No. 2 in A Major, Op. 68: IV. Theme with Variations. Adagio

Shostakovich: String Quartet No. 5 in B flat major, Op. 92

Shostakovich started writing string quartets when he was already a mature composer. Of his 15 quartets, all but the first and last were premiered by the Beethoven Quartet. Originally founded in 1923 under the name ''The Moscow Conservatory Quartet'', they changed its name in 1931 to “The Beethoven Quartet”, shortly before they were named ''Merited Ensemble of the USSR.'' The original members were Dimitry Tsyganov (1903-1992), Vassily Shirinsky (1901-1965) - violins. Vadim Borisovsky (1900-1972) - viola and Sergei Shirinsky (1905-1974) - cello. They have been together as a quartet for 42 years (!) Shostakovich held the group in the highest esteem, declaring, ''it has played a most significant role in the flourishing of our chamber music. These enthusiastic, fervent advocates of Soviet chamber music have played in many cities of our country, passing on to people their love for this music. Their performance of my works gave me a great pleasure. The Beethoven Quartet plays all my chamber works and its members always bear in mind my suggestions, putting them into practice with great understanding and talent.'' The Quartet's first violin, Dimitry Tsyganov, described their approach to preparing Shostakovich's string quartets for their premiere performances: ''First [Shostakovich] would play his new work on the piano from the score. Then he would give us the parts and beg us not to begin playing without him. He needed rehearsals not in order to test his new opus, and still less to change any of its details. He needed them in order to make the performers grasp his idea of the actual sound of the music. Our interpretations were authorized by Dmitri Shostakovich.'' Their association began in 1938 when The Beethoven Quartet gave the Moscow premiere of the first string quartet on November 16, following its first performance in Leningrad given by the Glazunov Quartet on October 10. Shostakovich attended the Beethoven Quartet's last rehearsal and their fruitful collaboration was formed. He dedicated several of the quartets to the group and to its individual members. In the recordings presented here, the first eight quartets are played by the original founding members. In the 9th and 10th quartets, Fedor Druzhinin is the violist, and from the 11th, Nicolai Zabavnikov is the 2nd violin. The 15th quartet has as its cellist Evgeny Altman. This DOREMI set, remastered in excellent sound, was awarded the Diapason d'Or.