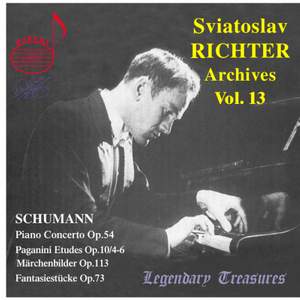 This new release is the thirteenth volume in DOREMI’s Svaiatoslav Richter Archives series. Considered one of the greatest pianists of the twentieth century, Svaiatoslav Richter was known for his virtuosic technique, vast repertoire, and the depth of his interpretations. On this volume, he performs Schumann’s Piano Concerto in A minor, Op. 54 alongside the USSR State Orchestra, George Georgescu conducting. The performance was recorded live in Moscow in 1958. The other performances are of Etudes on Caprices by Paganini, Marchenbilder for Viola and Piano, and 3 Fantasiestucke for Cello and Piano recorded in 1986, 1985, and 1969, respectively. He is joined on this volume by cellist Pierre Fournier and violist Yuri Bashmet.