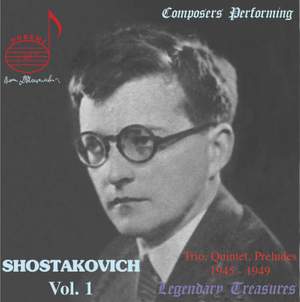 The world premiere recording of the Trio and the 1946 recording of the Quintet, with the original performers: spellbindingly intense performances. The piano pieces (some with spoken introductions)... — BBC Music Magazine, March 2007, 5 out of 5 stars More…

It is generally believed that recordings where composers play or conduct their own works confer deeper insight into what is on their printed scores. Shostakovich’s great gifts as a pianist may have been overshadowed by his acclaim and achievements as a composer. He was, however a distinguished piano virtuoso, and has toured widely concertizing in his own works. His mother, a fine pianist, was his first teacher. At 13, he continued studies at the St. Petersburg Conservatory under Leonid Nikolayev. The Trio Op. 67 was written in the summer of 1944. This CD contains the first recording of the trio. The second (of 1946) - with Shostakovich, Oistrakh and Sadlo, made in Prague, is available on DOREMI (DHR-7701). This recorded version of the trio Op. 67 is released on this DOREMI CD for the first time since its original release on 78rpm discs in 1945.

The world premiere recording of the Trio and the 1946 recording of the Quintet, with the original performers: spellbindingly intense performances. The piano pieces (some with spoken introductions) are of similar vintage.