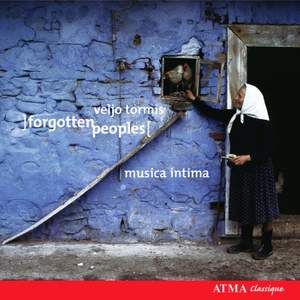 No. 1. Kutse jaanitulele I (Call to the Midsummer Bonfire I)

No. 2. Kutse jaanitulele II (Call to the Midsummer Bonfire II)

No. 3. Ei ole pussil puutav (Cannot Be Caught by the Shot of a Gun)

No. 4. Miks Jaani oodatakse (Why We Look Forward to St. John's Arrival)

No. 2. Lina loitsimine (Casting a Spell Upon Flax)

No. 2. Venesse pugiv neiu (The Maid Striving to the Boat)

No. 8. Laulda teile lauluke (To Sing You a Little Song)

No. 9. Kus sa tana magasid? (Where Did You Sleep Last Night?)

Veljo Tormis, born in Kuusalu near Tallinn in 1930, is considered by Estonians to be one of their most important composers of the 20th century. He has preserved the song heritage of peoples in the region between Estonia and Finland, peoples whose languages and songs have all but disappeared. The context for his work is the strong choral tradition and the history of Estonia (ancient and contemporary). Recently, its appeal has reached far beyond the Baltics. Having studied organ and choral conducting, he turned to composition in 1950. Almost all of his choral works are based on ancient Estonian and other Finno-Ugric folksongs. Tormis has been hailed for his colourful, almost orchestral style of writing for voices.

Internationally renowned for performances and recordings that sparkle with insight, youthfulness, and a vibrant musicality, Vancouver-based musica intima has earned a reputation as one of Canada’s most exciting vocal ensembles. This is musica intima’s third recording for ATMA Classique.