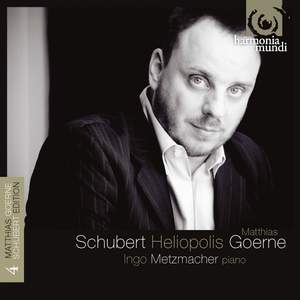 Although there are moments when the angst within Schubert's responses to Mayrhofer and the vanished gods could be more biting, Goerne has the measure of the noble declamation of these unique... — BBC Music Magazine, January 2010, 4 out of 5 stars More…

Matthias Goerne has received worldwide praise for his warm, fluid baritone and his profound interpretations. Highly respected as a Lieder singer, he is a frequent guest at renowned festivals and prestigious venues like the New York Carnegie Hall and London Wigmore Hall. Famous pianists such as Pierre-Laurent Aimard, Leif Ove Andsnes, Alfred Brendel, Christoph Eschenbach and Elisabeth Leonskaja are among his musical partners. From 2008 to 2011, Matthias Goerne will perform and record the most beautiful songs by Franz Schubert on eleven CDs for Harmonia Mundi, and important venues including the Wigmore Hall will present the complete series of eleven Schubert recitals with Matthias Goerne in the coming seasons.

"It's a journey any singer would leap at: Matthias Goerne is travelling through Schubert's songs with a new recording contract and a series of live recital bookings as far as the eye can see. It's invaluable for a singer in mid-career. " The Times

Although there are moments when the angst within Schubert's responses to Mayrhofer and the vanished gods could be more biting, Goerne has the measure of the noble declamation of these unique songs. When it comes to the Goethe settings, Goerne excels at recreating the uncanny metaphysical stillness of 'Meeresstille', and of the D224 'Wandrers Nachtlied'. And his final Mayrhofer 'Abschied', taken as slowly as is humanly possible, becomes a valediction of wide spaces and eloquent silences.

This is a simply unmissable recital, and for two prime reasons - the grave beauty of its programme and the corresponding beauty of the singer's voice. These songs of yearning, essentially spiritual, are very personal, and the imagination never shuts down. The pianist, Ingo Metzmacher, is fully responsive to this, and the recorded sound, of both voice and piano, is warm and vivid.

In volume four of Goerne’s Schubert edition, the song selection is still skewed towards the introspective and forlorn. Those moods are perfect for Goerne’s dark baritone...and, always, the elegantly responsive piano of Ingo Metzmacher, better known as a conductor. The pair seem very simpatico.