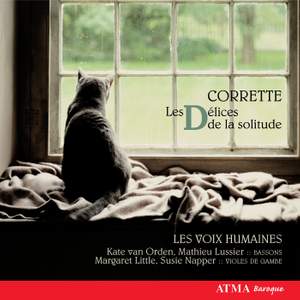 Susie Napper and Margaret Little have been thrilling audiences with their performances of exotic masterpieces of the 17th and 18th centuries for the past twenty years. Les Voix Humaines are renowned for their spectacular arrangements of a wide variety of music for two viols and their brilliant performances of contemporary music commissioned by the duo.

The arrangements on this CD by Les Voix Humaines call for from two to seven instruments, and aim to give as varied an overview as possible of the many ways in which one can interpret this kind of sonata. It must be admitted, however, that even taking the solitude in question to be that of the soloist, the richness of the accompaniment in some of these versions somewhat counters the putative solitude announced in the title of this collection.

Les délices de la solitude (The Delights of Solitude) is a group of six sonatas published for the first time around 1739. It was republished in 1766 in a version exclusively for cello. In this collection, Corrette clearly demonstrates his diverse and robust talent. In Le phénix (The Phoenix) that was published in 1738, the bass instruments are invited to change their usual behavior: to leave their solitary haunts for another kind of pleasure, that of shared conversation. If only because it is the only one of its kind, this little masterpiece is truly a rare bird, and well merits its title.