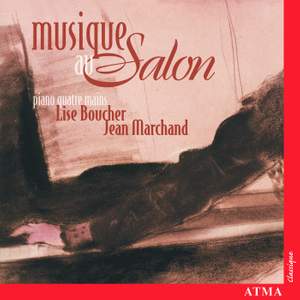 The turn of the 20th century was a sort of Golden Age of private music-making, and the piano especially occupied a prominent position in the drawing room, decades before the radio. Europe was then turning out a host of popular piano pieces—often for the convivial combination of four hands upon a single keyboard—which also flooded abundantly across the Atlantic; composers and the music industry in America soon followed suit and piano benches here were brimming periodically with new goodies for eager hands and ears. Now these were not necessarily easy pieces for beginners; the salon pianist of yesteryear was often a well-trained amateur and the works he played were frequently composed by concert pianists for their own use before they were printed for extra mileage. Pianists Lise Boucher and Jean Marchand have dusted off some of these olden treasures, and if one sits back and imagines the surroundings of that bygone drawing room, they just might sound new.