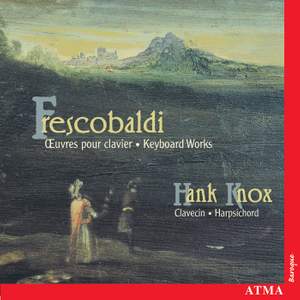 It is tempting to see the history of music in Frescobaldi's time as a kind of Darwinian struggle between the conservative, rule-bound traditions of the sixteenth century and the freely expressive innovations of the early seventeenth century, or between the prima pratica of contrapuntal rigour and dry, intellectual structures, and the seconda pratica of the expressive madrigal, toccata and sonata with its emphasis on personal expression and freedom. For Frescobaldi, however, the two conflicting styles of composition amount to two facets of the same musical coin, which both shine brilliantly thanks to harpsichordist Hank Knox’s riveting performance on a magnificent 17th-century Italian instrument that is part of Kenneth Gilbert's collection of early harpsichords presently housed in the Musée des Beaux-Arts in Chartres.