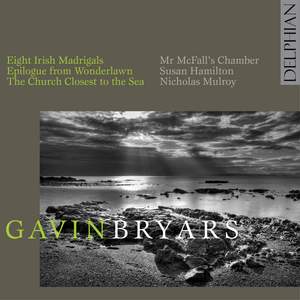 The inexorable ebb and flow in Bryars's music distils the sense of musical portraiture represented in The Church Closest to the Sea… There are moments of distilled beauty, too, in the earlier,... — Gramophone Magazine, January 2010 More…

No. 1, He Asks His Heart to Raise Itself Up to God

No. 3, He Considers That He Should Set Little Store on Earthly Beauty

No. 4, He Finds Comfort and Rest in His Sorrows

No. 5, He Is Jealous of the Heavens and the Earth

No. 6, He Understands the Great Cruelty of Death

No. 7, Petrarch Is Unable to Contain His Grief

No. 8, Laura Waits for Him in Heaven

Bryars: The Church Closest to the Sea

The double bass has always been close to Gavin Bryars' heart. His own instrument, it has also featured strongly in his music for other players - as in The Church Closest to the Sea, written for Mr McFall's Chamber and their bassist Rick Standley. Bryars' music straddles worlds: classical and jazz, composition and improvisation, the works on this disc moving between the lushly sensuous and the coolly laid-back as they meditate on geographical and emotional borderlands. Mr McFall's Chamber began in 1996 as a string quartet of players from the Scottish Chamber Orchestra, which took to playing nightclubs in an attempt to woo a younger audience.Over the past 10 years the group has grown to include a pianist and bass player, as well as a succession of drummers, percussionists, singers and guest instrumentalists, and which plays a range of music from tango through jazz and rock to contemporary classical, taking in quite a lot besides. Recent projects include work the Big Tent Festival, Falkland, Fife in July.

"I believe the group - in what it does, and in what it represents - is potentially the most important single development on the Scottish musical scene in a long time" The Herald, [on Mr McFall's Chamber]

The inexorable ebb and flow in Bryars's music distils the sense of musical portraiture represented in The Church Closest to the Sea… There are moments of distilled beauty, too, in the earlier, Ave Maria-esque Epilogue from Wonderlawn. The work's calm veneer exposes at times a deeper restlessness, effectively communicated by Mr McFall's Chamber in a recording which brings out the very essence of Bryars's expressive voice.