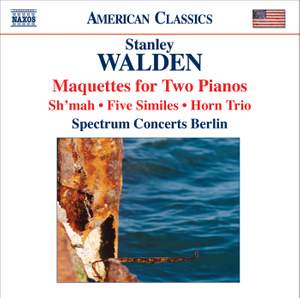 A native of Brooklyn, New York, the composer, clarinetist, conductor, actor, film director and educator Stanley Walden has written orchestral, chamber and solo works, as well as operas and musicals including Oh! Calcutta!

This disc of chamber and instrumental works features Maquettes or “models” for two pianos, the five miniatures for solo piano Similes, Sh’mah for violin and cello, developed from sources of traditional Jewish music, and the Horn Trio, written “out of a controlled sadness and rage at the events of Sept. 11, 2001”.