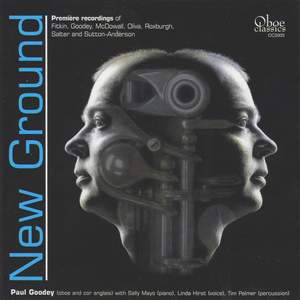 Goodey is a persuasive advocate for an engaging selection of contemporary music, including Edwin Roxburgh's 1979 At the Still Point of the Turning World..., which uses electronic delay and treatment... — BBC Music Magazine, 4 out of 5 stars More…

Fitkin, G: Ostrich on the Plain

Roxburgh: At the still point of the turning world…

Oliva, Michael: Into the Light

I - With Feverish Energy

Xas-Orion was conceived by Paul Goodey and Michael Oliva as a duo for oboe and electronics organised in 33 triggered events. Both parts are organised around the note 'B' which forms a core, rather than a tonal centre. The distinction between the the two sound worlds of oboe and electronics is deliberately blurred.

New Ground (by David Sutton-Anderson) is a set of linked variations on Purcell's keyboard piece 'A New Ground' heard at the outset.

Ostrich on the Plain (by Graham Fitkin) was written in 1985. There were two starting points: first, the manipulation of speed using metric modulation, and second, the sheer effort in playing the oboe.

At the Still Point of the Turning World... (by Edwin Roxburgh) has the sound of the oboe fed through a system of six delays, ranging from 4.2 to 60 seconds, plus filtering and modulation. The whole system is controlled by a graphic score.

Into the Light (by Michael Oliva) is a piece in the Romantic tradition of the tone poem. It takes the form of a journey from death (cor anglais) into a supposed afterlife (oboe) in which the piano plays the role of a sort of 'pulse giver'.

Diptych (Abstractions IV) by Timothy Salter has two movements, the first marked 'with feverish energy' and the second 'reflective yet with intensity; restless, agitated'. The mood at the end of the first movement is carried over into the cor anglais soliloquy that opens the second.

Fox Woman(music by Cecilia McDowall, words by Christie Dickason) uses the oboe in a way that exploits not only its elegance and subtlety, but also its potential for brutality. This range suggests the Japanes myths of fox spirits, dangerous shape-shifters which often took the form of beautiful women.

Goodey is a persuasive advocate for an engaging selection of contemporary music, including Edwin Roxburgh's 1979 At the Still Point of the Turning World..., which uses electronic delay and treatment to create an entire grazing flock of oboes, and Cecilia McDowall's White Fox Woman, a sinister little scena for voice and oboe especially written for the disc

There is a satisfying range of moods, styles and sounds ... and a good deal of accomplished playing and singing. The most immediately attractive pieces are Into the Light (where the cor anglais conducts us from death to the afterlife, then entrusts us to the oboe, like Virgil handing Dante over to Beatrice) and the engaging Ostrich on the Plain.

Xas-Orion ... is spacious and inventive... it sustains its duration well. Roxburgh's work ... proves most effective; he has a strong sense of his resources, with Goodey an able advocate