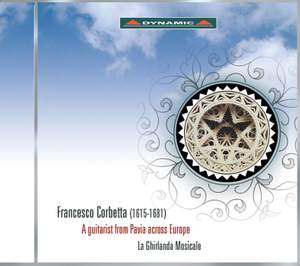 Corbetta: A Guitarist From Pavia Across Europe

Francesco Corbetta was a well-known personality in the musical life, not just of Pavia, but also of various European courts. Born around 1615, he was active in Bologna, and in Mantua. He travelled through Spain, Italy, Germany, France, England and the Low Countries. In 1676, he settled definitively in Paris where he died in April 1681, leaving a musical bequest of remarkable entity. His most precious virtue was to have made the guitar speak the true language of love. His fame did not depend exclusively on his skill as a guitar performer but also on the originality of his composition. Corbetta experiments and seeks new solutions and adopts different styles: His only preoccupation is to affirm categorically the validity and originality of a purely guitar repertoire, quite distinct from writing for the lute. The selection proposed here offers an overview of the musician’s stylistic sweep.