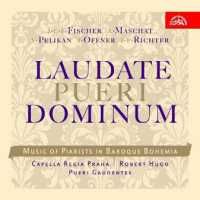 Music of the Piarists in Baroque Bohemia

Choosing the psalm verse Laudate Pueri Dominum as the title for this album did not come about by chance. These words (Praise the Lord, ye boys) very aptly characterise the activity and mission of the Piarist Order, which in the 17th and 18th centuries took care of boys from humble backgrounds in the Czech lands. The Piarists meticulously attended to liturgical music and the boys had participation in music included in their “job description”.

By inviting the Pueri Gaudentes boys’ choir to make the recording, we aim to familiarise today’s listener with the sound and timbre characteristic of the music produced by the Piarists in this period. Robert Hugo, a specialist in Baroque Music, prepared for the album a repertoire which, according to the preserved inventory, was performed in the 17th century at the chapel of the Piarist Gymnasium in Slaný, where – some 350 years after the College was founded (1658) – this unique recording also originated.

Capella Regia and outstanding young soloists present to us the majority of the pieces in a modern-day premiere. It seems that we owe a great deal to Czech Baroque composers (case in point being J. C. F. Fischer and J. F. Richter). Let this energy-charged album be one of our repayments.