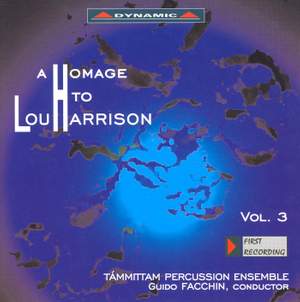 Harrison, L: Jahla in the Form of a Ductia to Pleasure Leopold Stokowski on his 90th Birthday

Harrison, L: Music for Bill and Me

IV. Image in the Soil

Harrison, L: Songs in the Forest

Harrison, L: Praise(s) for the Beauty of Hummingbirds

I. The Trumpets of Heaven

IV. The Battle of with Bunyan

VI. Meeting with the Ancient of Days

It is not easy to define such a complex, eclectic and exuberant personality as that of Lou Harrison, composer from the American West Coast and literary talent who, in the course of his artistic career, won numerous awards, among them the Pulitzer Prize and the Twentieth Century Masterpiece Award. Listening to this third CD dedicated by Guido Facchin’s ensemble to the eighty-four-year-old Californian composer, we are impressed once again by the stylistic variety and remarkable imagination of his works, spanning from the exotic avant-gardism of Song in the forest (1992) to the unexpected Baroque suggestions of Serenade (1978). Many of the pieces featured are world première recordings.