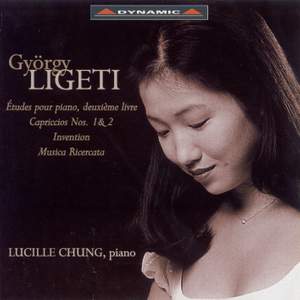 Born in Transylvania in 1923, GyÖrgy Ligeti is undoubtedly one of the greatest contemporary composers, a musician open to most daring construes and a recognised school founder. After leaving Hungary in 1956, Ligeti worked for a long time with Stockhausen; then, from 1970, he turned to a music language that was increasingly melodic. The piano works recorded by the Canadian pianist Lucille Chung in our CD span some 40 years of the composer’s activity, from early works such as the 2 Caprices (1947), to the eleven pieces of the cycle Musica Ricercata (1951/53), to the eight Etudes Vol. 2, written between 1988 and 1993 in an iridescent, new music language.