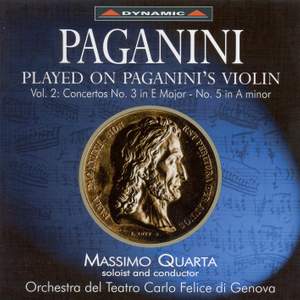 Paganini: Violin Concerto No. 5 in A minor

The concertos here recorded - like those of the first volume of the series - are played on the famous Guarneri del Gesù that belonged to Paganini, currently kept in the Genoa City Hall. This 1742 instrument, which has an extraordinary sound, is very well preserved.

Once again Massimo Quarta, winner in 1991 of the Paganini Competition, has proven well up to the task, mastering a violin that is as beautiful as it is difficult to play and performing in the double capacity of soloist and conductor of the Genoese Teatro Carlo Felice Orchestra.

As for the Concertos Nos. 1 and 2 of Volume one, also for Nos. 3 and 5 new editions based on Paganini’s autographs were prepared. For Concerto No. 5, in particular, Dynamic commissioned from the musicologist and viola player Francesco Fiore a new orchestration, which would substitute that written by Federico Mompellio in 1959. Of this Concerto, in fact, only the part of the solo violin exists in Paganini’s own handwriting, with a guide to the orchestral tutti as well as some sporadic hints of accompaniment and indications of instrumentation. The orchestral score was probably never written by the Genoese composer.

Maestro Fiore set himself two goals: the first was to write a score philologically respectful of the Paganinian stereotypes; the second was to underline the fact that the style of the mature Paganini was very closely linked to that of the most important Italian operatic composers of the day (Rossini, Donizetti and Bellini). What has emerged is a newer and fresher Paganini, a Paganini of great effect.