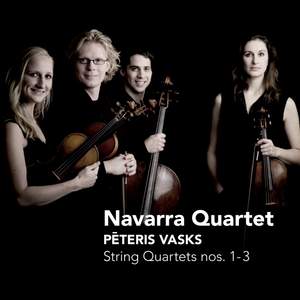 All three works, recorded in the presence of the composer, are projected with almost graphic immediacy by the Navarra Quartet who deliver compelling performances captured here in extremely vivid... — BBC Music Magazine, Christmas 2010, 5 out of 5 stars More…

The Latvian composer Peteris Vasks’ beautiful and intense music has in recent years touched the same listening public that have responded so positively to the music of Arvo Part and Henryck Gorecki. On this CD award-winning young ensemble the Navarra String Quartet have worked alongside the composer to produce a recording of the first three of Vasks’ five string quartets.

The Navarra Quartet was formed in 2002 at the Royal Northern College of Music under the guidance of the late Dr Christopher Rowland, the Quartet were Junior Fellows at the RNCM and postgraduate students of the Alban Berg Quartet in Cologne. The Quartet has won numerous prizes and awards, including Second Prize in the 2007 Melbourne International Competition and First Prize in the 2005 Florence International Competition. In 2009 the Navarra‘s gave debut concerts at the Concertgebouw in Amsterdam, Philharmonie in Luxembourg, and took part in the Haydn series at Wigmore Hall, broadcast by BBC Radio 3. They also recorded Haydn’s 7 Last Words on the Cross for Altara Records for which they commissioned 9 paintings for illustrated performances from world-renowned artist Jamie Boyd.

Peteris Vask’s music is the product of a country that for years struggled under the yoke of the Soviet regime. They are heavy themes that motivate Vasks’ music. The First String Quartet, written in 1977 and revised in 1997, reflects the feeling of an oppressed Latvian, while The Second String Quartet, from 1984, bears the title Summer Tunes and is a reflection of Vasks’ love for nature, especially birds. Although the Third Quartet is more abstract, the most important symbols of Vasks’ work still figure prominently: the aleatoric passages representing chaos, the birdsong , and the folk music that underscores his Latvian identity.

All three works, recorded in the presence of the composer, are projected with almost graphic immediacy by the Navarra Quartet who deliver compelling performances captured here in extremely vivid sound.

it's the Navarras' gorgeously songful tone in the reflective finale ("Melodia") that lingers longest in the memory...Challenge Classics' irrepressibly vivid sound fairly leaps out of the speakers