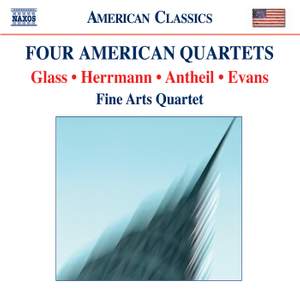 This recording gathers four string quartets by American composers who are widely divergent in style and manner, and who have made a distinctive and personal contribution to this endlessly re-inventive format. Finally completed in 1995, Ralph Evans’s First String Quartet is written in a non-derivative style, with tuneful melodies, lively counterpoint and piquant harmonies. Philip Glass has completed five mature quartets, his Second Quartet deriving from a theatrical presentation of Samuel Beckett’s prose poem Company. The self-styled ‘bad boy of classical music’, George Antheil wrote three string quartets, the third of which is permeated by a folk-music ambience. Best remembered for his film scores, Bernard Herrmann had not released a concert work for 25 years when he wrote Echoes. Its title applies to the thematic connections unobtrusively linking the ten sections of this one-movement piece.

No masterpieces here but a pleasant enough collection. Expertly played…

This eclectic collection of Americana hardly gives a representative survey of 20th-century trends, but it is welcome all the same. Most interesting are the Third Quartet of George Antheil, where Dvorák meets Shostakovich, and Bernard Herrmann's Echoes for String Quartet, music that typically combines atmosphere (it was written for a ballet) with motivic tautness. The best thing about Philip Glass's Second Quartet (Company) is that it is blessedly short, but the attractive First Quartet by the Fine Arts Quartet's violinist Ralph Evans has plenty of substance. Performances sound a little rough at times, but the players' advocacy is never in doubt