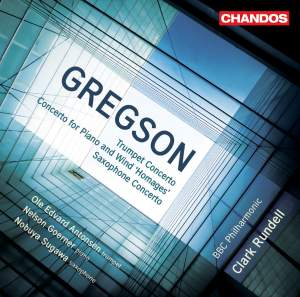 …the masterly Concerto for Piano an Wind used Stravinsky as a model without losing originality. The Trumpet Concerto is full of sparkle and energy too; but it too has an elegiac, haunting soliloquy... — Gramophone Magazine, September 2008 More…

III. Not too fast, but with energy

Edward Gregson is one of Britain’s most versatile composers, whose music has been performed, broadcast and recorded worldwide. A noted conductor of contemporary music, he has also held numerous academic posts. He retires as Principal of the Royal Northern College of Music at the end of this academic term.

Gregson’s life-long fascination for the concerto form began early but having been brought up in a Salvationist family it was inevitable that the brilliant sound of the British brass band should play an important role in the early years of his composing career. This led to a parallel universe of musical experiences. ‘On the one hand I was playing music by some fine brass band composers and on the other being absorbed in the music of Bartok, Prokofiev, Hindemith, Webern, Stravinsky, Shostakovich, Tippett and others.’ This musical landscape greatly influences his compositional style to this day. ‘…my concertos use musical reference or homage, as a backbone to the work. Each uses the idea of musical tribute in a different way.’ The Concerto for Piano and Wind and Saxophone Concerto, in particular, pay tribute to those composers whose concertos Gregson loved when he was a teenager. In the slow movement of the Saxophone Concerto Gregson actually quotes the opening of the Berg Violin Concerto, ‘mainly because my own musical fabric in that movement is built on a twelve-note row with a strong reference to major and minor thirds. In my Trumpet Concerto, the slow movement uses Shostakovich’s musical cipher DSCH as the main reference point to what is an In Memoriam to the Russian master who had died not long before I started writing the work.’

…the masterly Concerto for Piano an Wind used Stravinsky as a model without losing originality. The Trumpet Concerto is full of sparkle and energy too; but it too has an elegiac, haunting soliloquy for a slow movement. Perhaps most remarkable of all is the Saxophone Concerto, a dazzling cornucopia of ideas ad jazzy dance episodes. All three performances are outstanding... and this collection cannot be too highly recommended.